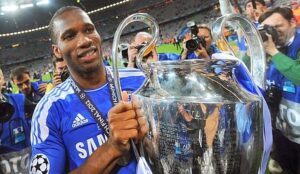 epa03230287 (FILE) A file picture dated 19 May 2012 shows Chelsea’s Didier Drogba celebrating with the trophy after the team won the UEFA Champions League final between FC Bayern Munich and Chelsea FC in Munich, Germany. Ivory Coast striker Didier Drogba confirmed on 22 May 2012 that he will leave Chelsea on a free transfer at the end of June 2012 after eight years with the London club. EPA/TOBIAS HASE