You are at:Home»Proposte Integrate»Riscaldamento Tecnico-Coordinativo, Proposta num. 14»Syria’s soccer squad warm up during training at Jalan Besar Stadium in Singapore 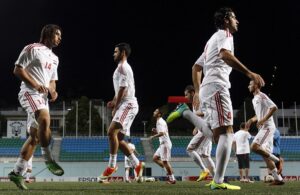 Syria’s soccer squad warm up during training at Jalan Besar Stadium in Singapore October 14, 2013. Mentally scarred by the turmoil at home after two-and-half-years of civil war, Syria’s national football team are hoping continued success on the pitch can give their compatriots small reason to cheer. Syria, who beat Iraq to win the West Asian Championships for the first time in December, take on Singapore on Tuesday in an Asian Cup qualifying match as they attempt to reach the finals of the region’s premier tournament in Australia in 2015. REUTERS/Edgar Su (SINGAPORE – Tags: SPORT SOCCER)